Much of law school focuses on primary sources - case law, statutes, regulations - but these sources may only be a part of what you need to research, either in school or while practicing. This is particularly true for areas involving administrative law, where you will need to be familiar with primary sources plus administrative procedure, interpretive rules, and the policy-making process for starters. Administrative procedure is beyond the scope of this guide, but there are resources and classes concerned with it. For more information on interpretive rules, see the "Regulations and Interpretive Rules" page.

Keep in mind that administrative agencies use the term "policy" in all of its potential definitions. There are policies that affect the operation of day to day business such as a personnel policy - this we won't discuss. There are policies that discuss how the agency views a regulation - what the agency thinks employees and those affected should do in order to comply with regulations. For agency policies that fit this definition, see the "Regulations and Interpretive Rules" page. Then there are public policies that reflect the direction of the agency and problem-solving approaches. This definition is what we will discuss here. Making public policy is part of the law-making process conducted by governmental agencies and interested parties while the analysis of existing policies is traditionally a part of the political science discipline.

Almost any resource can be useful for policy making so long as it is relevant, accurate, and reliable. Much of this research is conducted online now. If a website does not provide information about their organization, where they look to for factual information, and potentially even their funding, then it may not be a reliable source. If you are not sure, consult a librarian because information professionals are trained in ascertaining legitimate information sources. The rest of this page overviews just a few of the helpful resources in immigration policy.

Here are a few definitions for context.

The Congressional Research Service (CRS) is a non-partisan body staffed primarily by attorneys within the Library of Congress that produces reports at the request of members of Congress. These reports, known simply as CRS Reports, can provide analysis and background information (including statistics and historical discussions) from a non-biased point of view.

These reports are not made available to the public by the Library of Congress, but some can be found in various locations online for free and through commercial databases. Most free websites are similarly organized and coverage differs. When you first start searching CRS Reports, try the various options to see which works best for you.

Databases for the Loyola Community

Statistics are important for policy making. You can find them in many places, but it is essential that you are able to rely on the accuracy of your sources.

The use of statistics can be valuable and meaningful to the position you are researching and writing about, but remember the saying long attributed to Benjamin Disraeli: “There are three kinds of lies— lies, damned lies, and statistics.” Make sure you use a reputable source for identifying statistics, and use them appropriately and accurately. Anything less will harm your reputation and may hurt your grade or, worse yet, your client’s case.

When doing general searching for data and statistical information, you should start here: TRAC Immigration - "The Transactional Records Access Clearinghouse (TRAC) is a data gathering, data research and data distribution organization at Syracuse University." Here you can find reports, figures, data tools, and government studies relating to immigration. For example, 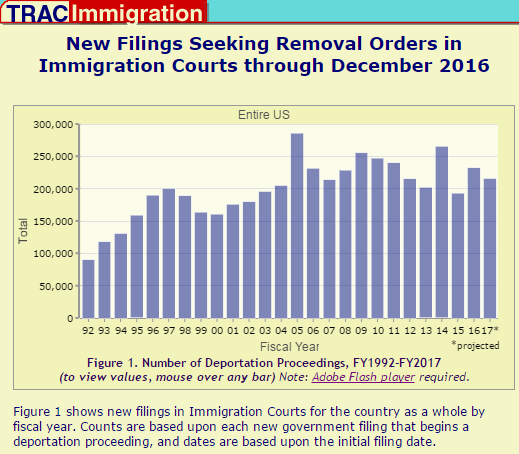 Policy-makers often look to other places for potential solutions to problems. This happens between states within the U.S. and between different countries. This is because comparing policies can:

"A knowledge and understanding of the public policies of other countries will allow each student to make more valid assessments of the public policies in this country. On the face of it, it seems absurd to reject national health insurance, for example, in favor of private health delivery, unless one actually has examined how well or poorly this policy has worked in other countries. . . . Whatever policy position you wish to defend, you will be a more successful advocate of that position if you are familiar with its alternatives." Howard M. Leichter & Harrell R. Rodgers, Jr., American Public Policy in a Comparative Context 15-17 (1984).

This is a very generic category that could encompass materials from government agencies, non-profits, think tanks, etc. When you are using these resources, be sure to consider whether they may have a partisan bias or other specific agenda, as it may skew their recommendations and your understanding. An quick note on partisan leanings for think tanks is Elizabeth Jensen, What to Think About Think Tanks?, NPR (Apr. 12, 2011), http://www.npr.org/sections/ombudsman/2011/04/22/134229266/what-to-think-about-think-tanks. Below are a few of the many examples.

Those who cannot remember the past are condemned to repeat it.

George Santayana, The Life of Reason; or, The Phases of Human Progress (1905).

Books and journal articles are some of the best places to find historical materials. They will provide analysis and often review or reproduce original historical documents. Loyola members can check out books from the Law Library, the main university library Monroe, and Tulane Law Library. Use the library catalogs to search for books and related materials:

A great new online resource is Immigration Syllabus, affiliated with the Immigration History Research Center at the University of Minnesota and the Immigration and Ethnic History Society. It provides "[e]ssential topics, readings, and multimedia that provide historical context to current debates over immigration reform, integration, and citizenship."